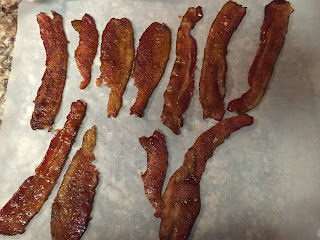 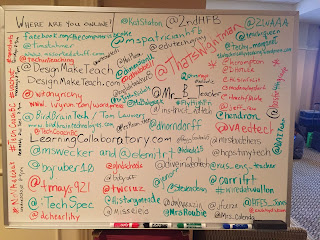 Last year my district rolled out a new student information system that included an online portal for parent access along with smartphone app. The app was rolled out district wide first last spring while the portal was piloted in a few schools followed by a general rollout this year. Since then there’s been a bit of confusion among parents about how to use both. Because of that my principal asked me a few weeks ago to put together a presentation about both for a monthly PTA meeting. Linked below is what I came up with along with two PDFs that are linked within it. (One from the district and the other from Aspen itself.)

A few weekends ago the wife and I made the trek up to northern Virginia to the closest IKEA to pick up a few things for our house. I also grabbed two cheap tech related things that have proved very useful. Above is how the underside of the desk in my home office has looked up until now, a tangled mess of cords. Thanks to this nifty little add on, the Signum cable management bracket, however it’s now completely cleaned up as seen below. 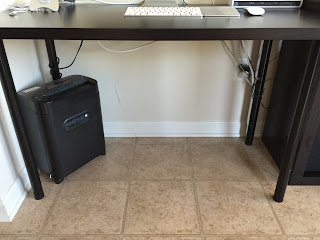 I also found this cheap little stand for all of two dollars. Normally on my desk my Mac is docked with an older 24” Apple Cinema Display running at 1920 x 1200. While this is usually enough screen space ocassionally I want to run dual display but I’ve always found it annoying to cope with the lower height of the laptop’s screen when it’s sitting flat on the desk. While the stand is designed for tablets it fits my 13” MacBook Pro perfectly and gives it just enough height to make it useful. 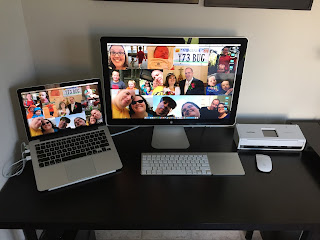 Resources from the Library of Virginia

I was first introduced to the Library of Virginia during my time as undergraduate at VCU. I did quite a bit of research there for papers in my upper level history courses and also spent time looking up ancestors it in old census records. The semester I graduated I spent time in their special collections room doing research from an original 1862 Confederate field manual for a paper I was writing on Civil War field fortifications. I’ve also become a big fan of their Out of the Box blog that is a must read for anyone interested in Virginia history.

In previous social studies sessions I’ve done at staff development I’ve mentioned some of the resources they have. But I always felt like I was only scratching the surface of what they had to offer and wasn’t doing as great a job as I could be explaining it. At the end of September myself and another ITRT met with the education staff at the LoV to plan out sessions for the upcoming district wide Election Day professional development.

The presentation below is what came from that. The LoV staff, Adrienne Robertson and Catherine Wyatt, that put the slideshow together and did the presentation (with myself and the other ITRT assisting) did a fantastic job and the sessions were very well received. We had a mixture of history and English teachers along with a few from other disciplines as well. With the focus on research resources I think most everyone that attended came away with something they could use.

Along with the presentation are three other things of note that were used during the sessions.

Streaming into the Past V

Because of my background as a social studies teacher prior to becoming an ITRT, when I do professional development often do something in that content area. Roughly once a year for the past four years I’ve put together presentations on a collection of useful social studies sites. For our district wide pre-school subject area PD this year I did round five. I’ve developed a bit of a following in the district with these presentations and along with seeing a lot of familiar faces in my sessions I got some great positive feedback on the sites I had found. Interspersed among the slides are another round of corny cartoons to break it up a bit.

Along with linking the presentation on my Wiki site I’ve also placed the links in their own section on my Portaportal page. The previous presentations I’ve done can also be found on the Wiki as well.

Streaming into the Past V PowerPoint

My Wiki (Previous presentations can be found on the Presentations and Tutorials page.)
Posted by Jeff at 7:28 PM No comments:

A few weeks ago I bought a Pebble Steel and absolutely love it.  I've watched the wearables market for some time now but as long as the fancy watch my wife gave me years ago when we were dating was working it was hard to make the switch. When it finally gave up the ghost earlier in the summer (and was going to cost as much to repair as it did new) I finally started seriously looking at smartwatches. As much as I wanted an Apple Watch due to already being heavily invested in the Apple eco-system it was far more than I wanted to spend and the battery life by all accounts just isn't that good.

The main thing I wanted in a watch along with telling time was the ability to get notifications on my wrist since I tend to miss them in loud places or when my phone is in my pocket on vibrate at work. A longer battery life and not needing to charge it every day was a plus as well. I'd briefly considered pairing the Vybe bracelet with a regular watch but a coworker got one a few months back in their first round of shipping and it was far larger than I expected. (Along with being one additional device to wear.)

Enter Pebble. I didn't care much for the look of the plastic original but I was impressed with the black Steel model especially paired with the metal band. (And the newest color Pebble Time was more than I wanted to spend.) A few weeks back I went to Best Buy and picked one up along with ordering the band off Amazon since no where local had it in stock. Since then the only time it's only left my wrist has been at night when I sleep.

It's worked perfectly for what I needed. At $149 the price was perfect although I got it a little cheaper via an open-box model. It provides my notifications and the battery life has been fantastic even with the screen being always-on. I've been charging it on average every four days but could probably get an extra day out of it if need be. I've read some complaints about it not maintaining the Bluetooth connecting with the iPhone and while I've had a few issues here and there (mostly first thing in the morning for whatever reason) it otherwise hasn't been a problem.

If there is one complaint I have about it however it was swapping out the included leather band for the metal one. It includes a little screwdriver to do it yourself but the screws were in there tight (secured with Loctite according to accounts I read online) and I ended up having to take it to a local jeweler that charged me $10 to swap them. 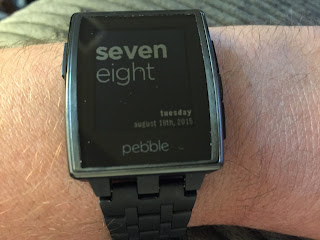 The principal of one of my schools has asked that all teachers have a website by early in the year. While I plan to do a pre-school workshop on it I also put together a guide on Blogger for teachers that want to get a jump start on it using the most excellent screenshot/guide app, Clarify 2.

In the email I sent to my teachers I mentioned that while they were free to use any website creator site or software they wish (and I know several of them are already using Wordpress, Weebly, and others) I personally like Blogger and think it works best for the following reasons:

1. It's easy to use and very customizable if you so choose. I've covered the basics in the guide but I encouraged my staff to explore it and check out all of the other functionality that's available.

2. While they will need to use a personal Gmail account to access it (it's currently blocked under our work accounts) when it becomes available within those accounts it will be very easy to move it over from personal to work and access everything from one place.


3. By using Blogger teachers can post an entry at the beginning of each week that covers the upcoming assignments, assessments, SOL objectives, etc. This not only covers the principal's requirement that they have a page for alerts and updates but perhaps best of all it gives parents and students the ability to sign up for email notifications when entries are posted.

The walkthrough can be downloaded here. (PDF format.)
Posted by Jeff at 6:18 PM No comments: